Learning how to pronounce the letters in the Turkish alphabet (Turkish orthography) is one of the first and the most important steps you take.

Learning new words and bringing them together to make meaningful sentences is a lot easier once you have mastered the spelling and writing of the Turkish alphabet’s letters correctly.

First of all, if you master the Turkish alphabet early enough, you’ll be able to distinguish Turkish words and sounds. This will directly increase your comprehension.

A big mistake that the learners often make is to learn letter pronunciations wrong. This causes many problems and is not easy to fix later.

So, make sure that you are learning the pronunciation of each letter correctly.

This is an important and nontrivial step as there are distinct sounds that don’t exist in other alphabets. Let’s begin with the very basics.

How do you say ‘letter’ in Turkish?

Unlike French or English, the Turkish alphabet is phonetic. This means that each letter has one sound, and every one of them is pronounced.

While each letter is pronounced, two or more of them are not combined to make a new sound.

This makes your life easier when you are trying to read a word in Turkish!

Alphabet – Lower and Uppercase letters in the Turkish Language.

This list shows you the Turkish alphabet pronunciations. Try to exercise.

These classification will be meaningful when learning vowel harmony rules. At this point, it’s okay if you are just familiar with this classification.

Vowels of the Turkish Alphabet

Consonants of the Turkish Alphabet

Consonants are divided into two according to whether the vocal cords vibrate or not:

*This classification will be meaningful when learning the consonant alternation.

Turkish Alphabet: 8 Essential Things That You Should Know

1. The pronunciation of ğ (soft g). Do you pronounce the soft g in Turkish?

Let’s give an example.

The Turkish word “Yağmur” (which is also a female name) means “rain” in English. It is pronounced as “yaaa-mhur” So, the letter “ğ” lengthened the letter before itself, which is “a” in our example. Don’t confuse the ğ (the soft g) with its sibling “g”.

3. Letters with the circumflex accent are pronounced longer.

The circumflex is a diacritic sign usually written above a letter.In Turkish, it is called “şapka” which means exactly “hat”. Most of the Indo-European alphabets don’t have it. Read more about the circumflex accent.

4. At the end of the letter, intervocalic k is transformed into ğ if attached another vowel. Alternation of consonants (synonym) is covered in detail in the consonant mutation/alternation page.

Can you give me the lid?

6.  In some dialects in Anatolia, k is pronounced as g. “Kapı” (eng. door) can be heard as “gapı” However, this is very informal and not recommended.

7.  “Y” is a little bit different than English “y”. For example, how you pronounce the word “copia” in Spanish is very similar to Turkish “kopya”.

8. Most of the French borrowing starting with s take the prefix –i in Modern Turkish.

9. Loanwords that have c are written with k.

Do not forget that there is no “x” in the Turkish alphabet, instead “ks” is used.

Some History About the Turkish Language Alphabet 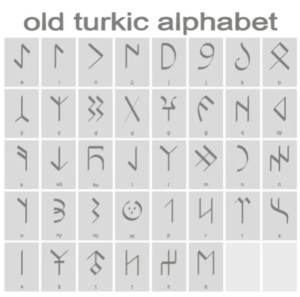 In the past, Turks have used a variety of scripts. Some of the ancient alphabets that the Turkish have utilized include Göktürk (Orhun), Uygur, Arabic, and Kiril.

Arabic script, which has an alphabet with a lot of consonants and limited number of vowels, was utilized during the Ottoman era. (The Turkish language, on the other hand, has eight vowels.)

The Latin alphabet was adopted in 1928, not long after the Ottoman Empire fell.

Turks utilized the Göktürk (Orhun) alphabet up until the eleventh century before switching to the Arabic script. The Turkish language’s sounds are thought to be best represented by this old alphabet. (Words were written in a manner like the Arabic alphabet with the Göktürk alphabet, from right to left.)

Old Turkish steles (Orkhon inscriptions), for instance, were written in the 8th century using the Göktürk alphabet. These steles mention the extent of the Turkish empire.

FAQs on the Alphabet