Let’s be sure what is a possessive determiner:

Possessive determiners attribute possession to the objects. Some of them: Their, my, your etc.

As you might guess, personal suffixes follow the vowel harmony rules. (Almost everything in Turkish grammar follows those rules!)

Senin kaç tane çocuğun var
How many children do you have

Onların evine gittim
I went to their house

For the plurals, the same rules apply. You attach the personal suffixes after the plural suffix (-ler/lar)

I choose the word ‘kitap’ in the second column on purpose. ‘p’ goes to ‘b’ because of consonant mutation phenomena. Watch the Consonant Harmony video if you don’t know or don’t remember.

One thing should be emphasized here: The suffix of the plural for the third person never repeats itself.

“Çocuklarları” is a significant cacophony.

1. In Turkish, some nouns and adjectives can be converted into an invocation by adding the first person singular suffix.

Exceptions to this rule:

In daily life, you may hear “Amerikalı” which has the same meaning with “Amerikan”. 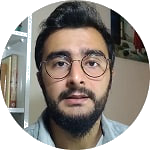