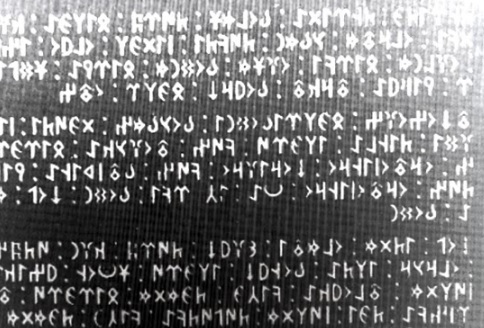 If you read any Turkish newspaper nowadays, you’ll find that the vocabulary is quite similar to occidental languages. Certainly, the alphabet they use is not very different than the ones used in Occident.

The old Turkic language was written in its own alphabet, which looks very similar to the Germanic runes (although there is really no relations between them). The Göktürk or Orkhon script is thought to derive from the Aramaic alphabet or perhaps from Chinese scriptures. About two hundred inscriptions are preserved and they all stem from the area of Mongolia, dated from the 7th to the 10th century.

Which scripts have Turks adapted to their language?

When Turkic peoples began to move south to Anatolia region in the following centuries, they came into contact with the Byzantine, Arabic and Persian cultures. The Ottoman Empire official script was the Ottoman Turkish alphabet, an adaptation of the Arabic alphabet which worked quite good for the words loaned from Arabic and Persian, but not so well for the vernacular.

Finally, this script was relinquished officially in 1929, when the westernization of the nation was in full swing. In its place, it was adopted the Latin alphabet that was used in most of the European countries and in whole America. Of course, it needed some attaches and modifications to suit the Turkish language, but only seven new characters appear. To us, this is an obvious advantage since we don’t need to deal with some complicated writing system to communicate within Turkey. However, this represented a severe shock for the Turks of the first half of the 20th century. The work of schools was the key factor in this point and nowadays the adapted Latin alphabet’s use is fully extended in the country. Actually, there is an incredibly small number of people who is able to read a newspaper from… less than a century ago! Imagine such an obstacle, for example, to study a document of 90 years old.